When oxygen is added to fuel gas it accelerates the burning rate of the gas, for example acetylene and oxygen burn at about 26 feet per second and alternate fuel gases (propane, natural gas, MAPP, or propylene) and oxygen burn somewhere in the 14 to 16 feet per second range. A backfire occurs when the flow of fuel gas, burning at the tip end with the support of oxygen, is reduced to a point where the burning rate overtakes the flow rate and backfires into the tip or torch, usually to where the fuel gas and oxygen are mixed. This is very audible when using large multi flames and the user turns the fuel gas off before the oxygen and hears a loud “bang” noise. The noise is created by the flame backfiring into the mixer. There are times when the backfire continues to burn in the mixer area supported by the flow of fuel gas and oxygen. This is generally accompanied by a loud whistle noise and is termed “sustained backfire.” Neither a check valve, nor a flash arrestor, will prevent a backfire or sustained backfire.

Flashback, on the other hand, is the ignition of mixed gases that develop in either the fuel gas or oxygen passages. This occurs when one or more of several situations develop while using a torch.

It can result during a sustained backfire, when systems are over pressurized for the size tip being used, the tip is plugged or dirty, the oxygen or fuel gas supply depletes or occurs due to operator procedural error. When fuel gas backs into the oxygen line or oxygen into the fuel gas line the mixture can travel through the torch, into the hose, through the regulator and into the supply cylinder or system. The volume involved represents a very dangerous situation. Reverse flow check valves at the torch help prevent the reverse flow of gases however they are mechanical devices and may malfunction. Quality flash arrestors on the other hand are not mechanical and therefore have not been known to malfunction. Flash arrestors are designed to permit forward flow of gas and therefore will also allow gases to reverse flow. For that reason reverse flow check valves are recommended upstream of the flashback arrestors. The flashback arrestors will stop the ignition of the mixed gases even if the reverse flow check valve malfunctions. The result is the ignition cannot ignite mixed gases in the hose, regulator, supply cylinder or system. Ignition of mixed gases does begin in the torch as it does with a backfire. This is dangerous but as a general rule quality torch designs will withstand the ignition and will not throw parts or melt unless there is sustained ignition without operator intervention.

Therefore it is recommended that the user always practice safe operating procedures and use both reverse flow check valves and flash arrestors at the rear of the torch.

An additional word of caution, use of inferior or multiple check valves and/or flash arrestor, etc., can restrict the forward flow of fuel gases contributing to backfires or in some cases reverse flows. Make certain to read and follow all operation instructions before using oxyfuel apparatus. 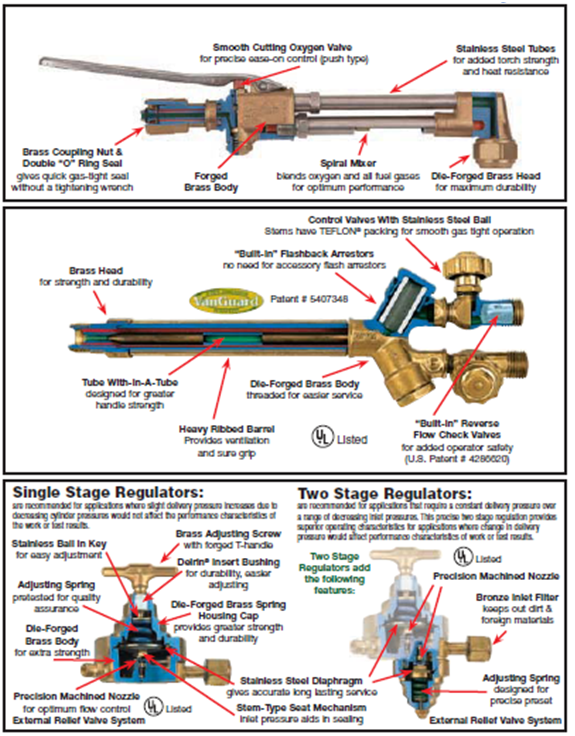